The American Center for Law and Justice (ACLJ) and its globally affiliated organizations are committed to ensuring the ongoing viability of freedom and liberty in the United States and around the world.
By focusing on U.S. constitutional law, European Union law and human rights law, the ACLJ and its affiliated organizations are dedicated to the concept that freedom and liberty are universal, God-given and inalienable rights that must be protected.
The ACLJ and its worldwide affiliates engage in litigation, provide legal services, render advice to individuals and governmental agencies, as well as counsel clients on global freedom and liberty issues. They also support training law students from around the world in order to protect religious liberty and safeguard human rights and dignity.
As a non-profit organization, the ACLJ does not charge for its services and is dependent upon God and the resources He provides through the time, talent, and gifts of people who share our concerns and desire to protect our religious and constitutional freedoms.

Founded in 1990 with the mandate to protect religious and constitutional freedoms, the American Center for Law and Justice (ACLJ) engages legal, legislative, and cultural issues by implementing an effective strategy of advocacy, education, and litigation that includes representing clients before the Supreme Court of the United States and international tribunals around the globe.

As ACLJ Chief Counsel Jay Sekulow continued to build his legal and legislative team, the ACLJ experienced tremendous success in litigating cases at all levels of the judiciary – from the federal district court level to the Supreme Court of the United States.

Over the last two decades, Sekulow has appeared before the Supreme Court of the United States on numerous occasions, successfully arguing precedent-setting cases before the high Court: Protecting the free speech rights of pro-life demonstrators. Safeguarding the constitutional rights of religious groups to have equal access to public facilities. Ensuring that public school students could form and participate in religious organizations, including Bible clubs, on campus. Guaranteeing that minors could participate in the political process by protecting their free speech rights in the political setting.

"Jay Sekulow is a true friend of Israel who has fought with us hand-in-hand in some of Israel’s most strategic, international battles," said Danny Ayalon, Deputy Foreign Minister, State of Israel, who also served as Israeli Ambassador to the U.S. "Jay was instrumentally-involved in projects that the President of Israel and the Prime Minister put on our national agenda."

Jay Sekulow is Chief Counsel of the American Center for Law and Justice (ACLJ), one of the most prestigious law firms in the country. He is an accomplished Supreme Court advocate, renowned expert on religious liberty, and a respected broadcaster. 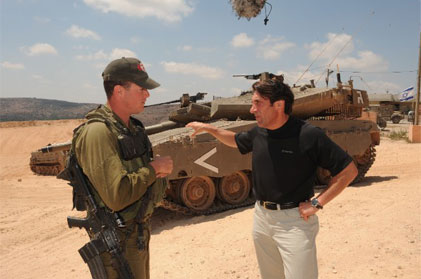 Jay Sekulow is an attorney with a passion for protecting religious liberty - freedom - democracy. For nearly a quarter of a century, he's been on the front lines - working to protect religious and constitutional freedoms in the courts, in Congress, and in the public arena.
At the Supreme Court of the United States, Jay Sekulow has argued 12 cases - including several landmark cases which have become part of the legal landscape in the area of religious liberty litigation. In the Mergens case, Jay Sekulow cleared the way for public school students to form Bible clubs and religious organizations on their school campuses. In the Lamb's Chapel case, he defended the free speech rights of religious groups, ensuring that they be treated equally with respect to the use of public facilities. In McConnell v. FEC, Jay Sekulow ensured that the constitutional rights of young people remain protected with a unanimous decision by the high court guaranteeing that minors can participate in political campaigns. Most recently, in Pleasant Grove City v. Summum, he secured a unanimous First Amendment decision clearing the way for governments to accept permanent monuments of their choosing - including Ten Commandments monuments - in public parks.

At the beginning, no one could have predicted that what began as a mission to protect religious liberty in this country would involve an international outreach. In a world where Christians face discrimination, violence, and even death for practicing their faith, it soon became clear that there was work to be done abroad. Jay Sekulow believes that religious liberty - religious freedom - is an international right - a global concern. He launched the European Centre for Law and Justice (ECLJ) - based in Strasbourg, France - the seat of the European Court of Human Rights. He serves as Chief Counsel of the ECLJ and has opened offices around the world in: France, Russia, Kenya, Zimbabwe, Pakistan and Israel.

Do you need legal help?

The attorneys who work with the ACLJ are some of the foremost legal experts on freedom of speech, religious freedom, and human rights law in the world. We have drawn upon their expertise to create a one-of-a-kind repository of legal briefs and information focused on these issues.

With more than one million members, the ACLJ is a powerful grassroots organization. Whether it's protecting the display of the Ten Commandments or the National Motto, Jay Sekulow is at the forefront - advising key decision makers in Washington, D.C. concerning the constitutionality of legislation - representing Members of Congress on amicus briefs at the Supreme Court - and encouraging the passage of laws that are constitutionally-sound.
To get the message out, Jay Sekulow has developed a comprehensive media strategy to expand the reach of the ACLJ - a daily radio broadcast tackles the tough issues that matter most, a weekly television show highlighting key decision-makers, a user-friendly website which provides updated information, and engaging and debating the issues in the public arena.
More Resources